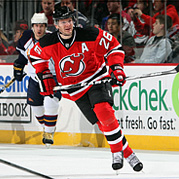 Hard work paid off as Patrik Elias picked up assist numbers 14, 15 and 16 in a 5-3 win over the Wild on Saturday night in Minnesota. Saturday's performance matches his personal best in assists in a game.

With the game tied at 0-0 in the second period, Patrik got the first scoring drive started when he beat defenseman Nick Schultz to the puck along the neutral zone boards and threw a pass up the wing that sent Dean McAmmond on a breakaway. McAmmond cruised in and lifted a backhand shot over Niclas Backstrom's glove to make it 1-0 at 5:13. A little over a minute later, while Eric Belanger sat in the box for interference, Patrik sent a cross-ice pass over to Jamie Langenbrunner who one-timed it in to give the Devils the 2-0 lead. Langenbrunner would later add two more for his first career hat trick. In the third, with the Devils leading 3-2 and pressing in the Wild zone, Patrik won another battle along the boards and sent the puck down to Rob Niedermayer below the right circle. Niedermayer drove to the net and centered the puck for Jay Pandolfo who jammed it through Backstrom. The Devils held on to take the game 5-3, improving their record to (29-10-1). Patrik was named the second star of the game. (Dan Altano)