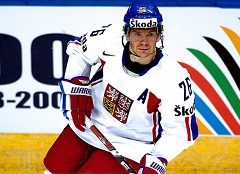 Patrik Elias first wore the national jersey for the Czech Republic when he was eighteen. In 1994 he played in the European Juniors Championship. His first game for the seniors was on May 12, 1998 in the semifinal of the World Championship against Finland.

Patrik Elias was named captain of the 2010 Czech Olympic Team.