Patrik Elias’ picture perfect deflection in the first period of Wednesday’s match with Slovakia was a fitting way to kick off the Czech Republic’s 2010 Olympic debut.

With the game scoreless through the first 11 minutes of play, Patrik drifted away from traffic in front of the Slovak net and redirected a hard point shot from Martin Havlat out of mid-air, fooling goaltender Jaroslav Halak. The goal is Patrik’s second in his Olympic career. The Czech captained logged a team leading 18:17 of ice time.

The Czech squad went on to win 3-1 thanks to a goal and an assist from Jaromir Jagr. The team is now tied with Russia for the top spot of Group B. They face Latvia on Friday. 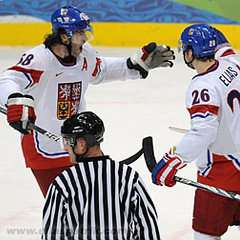