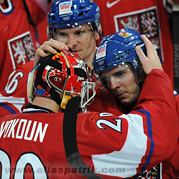 The Czech team fought off what could have been one of the biggest upsets of this tournament with a 3-2 overtime win Tuesday to advance to the Quarterfinals against Finland. Patrik Elias, who has contributed two goals and two assists thus far, failed to register a point for the first time in the tournament.

The Czechs dominated the play in the first period, outshooting Latvia 16-4 and scoring twice, but were unable to put the game away thanks in part to some strong play from goaltender Edgar Masalskis, who made 47 saves in the seesaw battle.

Latvia grabbed the momentum in the third and capitalized by netting a pair of goals in the final ten minutes to force overtime, but David Krejci’s tally in the extra period salvaged the game for the Czechs and kept them alive in the tournament.