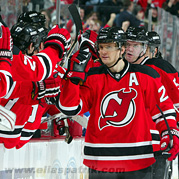 Patrik Elias has been named the NHL's Third Star for the week ending Dec. 21, the NHL has announced. Patrik led all scorers for the week, recording eight points (3G/5A) and extending his active point streak to 10 games as the Devils posted a 3-0-1 record. He began the week by recording one assist in a 3-2 shootout loss to the Toronto Maple Leafs Dec. 16, tallied two assists in a 5-3 win over the Buffalo Sabres Dec. 17, recorded four points (two goals, two assists) in a 5-1 win over the Ottawa Senators Dec. 19. Finally he added one goal in a 3-2 shootout win over the Philadelphia Flyers Dec. 21. Patrik Elias is second on the Devils in scoring with 37 points (16'G/21 A) in 31 games. He has recorded eight goals and nine assists for 17 points over his current 10-game point streak.