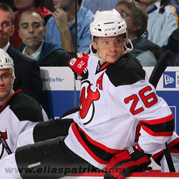 Patrik Elias is having a great season. Among Czech players, he has no competition. Up till now he got 46 points (18G/28A ) and has moved ninth spot in NHL stats. Moreover, after 40 games, he is more productive, than he has ever been in his career. Even in his best season (2000/01), when he recorded 96 points (40+56) and was third in NHL stats, he had after 40 games "only" 39 points. New Jersey still remembers the amazing show performed by the offensive line called "EASy" (Elias, Sykora, Arnotte). This season, Patrik has a chance to pass another his milestone. If he keeps current average (1,18 point a game) and would not be stoped by illness or injury, he'd get in the remaining 43 games another 51 points and by a single one heâd break his current 96 record, and thereafter he will not be far from the magic "100" milestone. Good luck, Patrik!