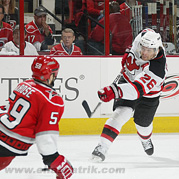 It took five shots and several quality chances for Patrik Elias to solve Toronto goaltender Vesa Toskala on Tuesday night, but when he finally broke through, he made it count. With New Jersey on the power-play early in the third period, Patrik blasted a return pass from Jamie Langenbrunner from the right circle that sailed over Toskalaâs glove to give his team the 2-1 lead. Paul Martin drew a secondary assist in the pretty passing play. After the Maple Leafs tied the game late, defenseman Johnny Oduya scored in overtime for the Devilâs fourth straight win, bringing the squad within six points of first place Boston in the Eastern Conference. Patrikâs goal was his ninth on the power-play this season and twenty-fifth overall. Next up, the Devils head to Long Island on Sunday to face the struggling Islanders at 2 p.m. (Dan Altano)