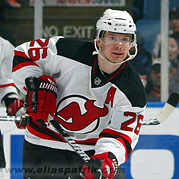 There was a time when all of this seemed so improbable. During the NHL lockout in 2005, Patrik Elias was hospitalized after contracting Hepatitis A while playing in Russia and was told he may not ever be able to play hockey again. Just a few years later, Patrik is enjoying one of the best seasons of his career and perhaps his most memorable as he leads his team into its 12th consecutive playoff appearance. Patrik’s journey back near the top of the NHL’s point leaders list has been an uphill climb, but the Czech winger has prevailed through the turmoil with flying colors.

On March 17, 2009, Patrik threw a picture perfect pass over to Brian Gionta who buried the game winning goal against the Chicago Blackhawks in front of a sold out Prudential Center. The point was Patrik’s 702nd of his career, breaking the all-time franchise points record set by John Maclean. Patrik’s accomplishment was the culmination of 13 NHL seasons all played donning the red black and white Devil colors. Devil fans stood on their feet for over three minutes to honor the achievement chanting “Patrik!” after the announcement was made.

Throughout the season, the 6 foot 1 assistant captain has been a model of consistency. He has recorded 31 goals and 47 assists, holds a +17 rating and is currently 12th in the NHL in points. He has already tied his career best in power play points with 31, has recorded 6 game winning goals and earlier this season tied the NHL record for most career overtime goals with 15.

Spending most of the season on the Devil’s second line alongside Dainius Zubrus and Brian Gionta, Patrik’s efforts helped propel the team through a difficult stretch without star goaltender Martin Brodeur who suffered an elbow injury in early November. Most notably, he recorded 19 points in just 14 games in the month of December highlighted by a 4-point performance (2g, 2a) against Ottawa on December 19th. 26 times this season when Patrik has scored the team has won. It has been a rollercoaster career for the 32-year old star, but if this season is any indication, his success story is far from over. (Dan Altano)