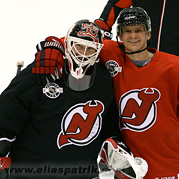 Patrik Eliasâs 24th goal of the season helped propel the Devils over the Colorado Avalance 4-0 on Thursday night in front of a jam packed Prudential Center. On a night that marked the return of Devilâs goaltender, Martin Brodeur after missing 50 games with an elbow injury, Elias and the Devils took a 6-point lead in the Atlantic Conference over the second place Flyers.

After numerous first period scoring chances, Elias scored a much needed Power Play goal 8:46 into the second period. When Paul Martinâs wide point shot caromed off the boards and sailed in front of the net, Elias rushed to the puck and slammed a quick backhand shot under the left glove of sprawling goaltender, Andrew Raycroft to make it 2-0. The steady wingerâs goal increased his point total to 65 points, one shy of 8th place among league leaders. He finished with 5 shots on net.

Next up, the Devils stay at home on Saturday, February 28 to face the Florida Panthers at 1 p.m. The team looks to avenge the 4-0 loss they were handed by the Panthers on February 17th at the BankAtlantic Center in Sunrise, Florida. (Dan Altano)